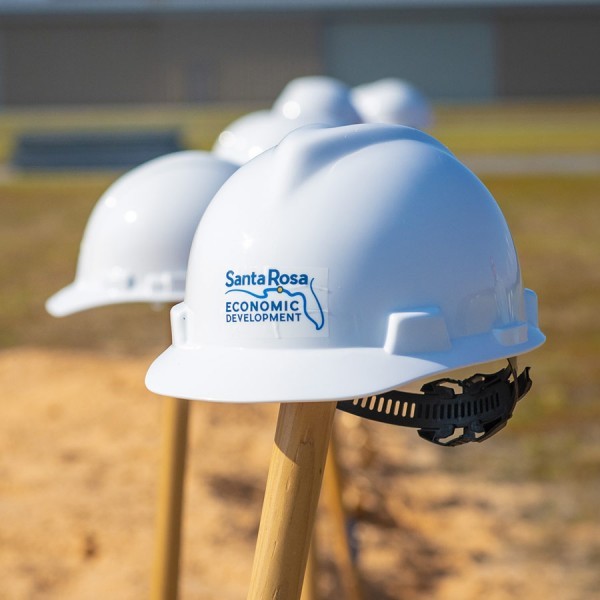 Santa Rosa County officials broke ground on a new hangar facility at Peter Prince Airport that will serve as the temporary home to AgustaWestland Philadelphia Corporation, dba Leonardo Helicopters, a Philadelphia-based aviation company that is expected to bring 50 new, high-paying jobs to the area. In April, county commissioners gave the go-ahead for design and engineering of the hangar, warehouse, and modular office complex. Construction on the new facility is expected to begin later this month.

“Leonardo Helicopters is exactly the kind of company we had in mind when we worked with the Navy to establish the Whiting Aviation Park,” said Commissioner Don Salter. “The company is not only bringing great jobs to the area, it’s also supporting the US military’s mission, and helping fulfill our vision to become a major aviation and aerospace hub in the Southeast.”

“Today’s groundbreaking is an important milestone in our shared commitment to providing the US Navy with both the best aircraft and the best, most immediate customer support for its critical training mission,” said William Hunt, managing director of Leonardo Helicopters – US. “Together in partnership with Santa Rosa County, the new hangar at Peter Prince Airport allows us to immediately begin maintaining the fleet locally as the first aircraft are delivered from our production line and while the permanent facility at Whiting Aviation Park is under construction.”

Leonardo is under contract with the Navy to deliver and maintain up to 130 new training helicopters that will be used at NAS Whiting Field. When infrastructure funding from Triumph Gulf Coast becomes available, the company will become the first tenant of the new Whiting Aviation Park and construct a larger facility there. The interim hangar at Peter Prince Airport will then be used to incentivize other, similar companies to locate operations here.

“Santa Rosa County is central to the highest concentration of military and private-sector aviation assets you’ll find anywhere,” said Erica Grancagnolo, Santa Rosa’s associate director of economic development. “With the Whiting Aviation park coming online, we will soon have the best aviation industrial site located in the heart of the nation’s most active military flight hub.”

Grancagnolo added that Leonardo’s experience is a model for how the county intends to pursue future aviation park tenants.

“We couldn’t ask for a better proof-of-concept than to have a company like Leonardo ready to move into Whiting Aviation Park before it’s even ready for tenants,” she said. “Our elected leaders acted swiftly to approve this interim facility, which helped us land this high-paying prospect and will continue to help us close more deals in the years to come.”

Whiting Aviation Park was created in partnership with the US Navy and shares space with NAS Whiting Field, a major rotary and fixed-wing training facility. An agreement between Navy and the County allows civilian companies in the park access to both the runways and towers on the airfield. County officials are working with Triumph Gulf Coast to fund infrastructure that support the operations of multiple companies on the site.

Leonardo’s Hunt said the company is grateful for the County’s support.

New hangar facility to be constructed at Peter Prince Airport in Milton, Florida