Santa Rosa County officials today, Tues., Mar. 1, honored former County Commissioner Don Salter by naming a street that leads into the new Whiting Aviation Park. About 75 people were in attendance when the street sign labeled Don Salter Boulevard was unveiled by Salter and his family. 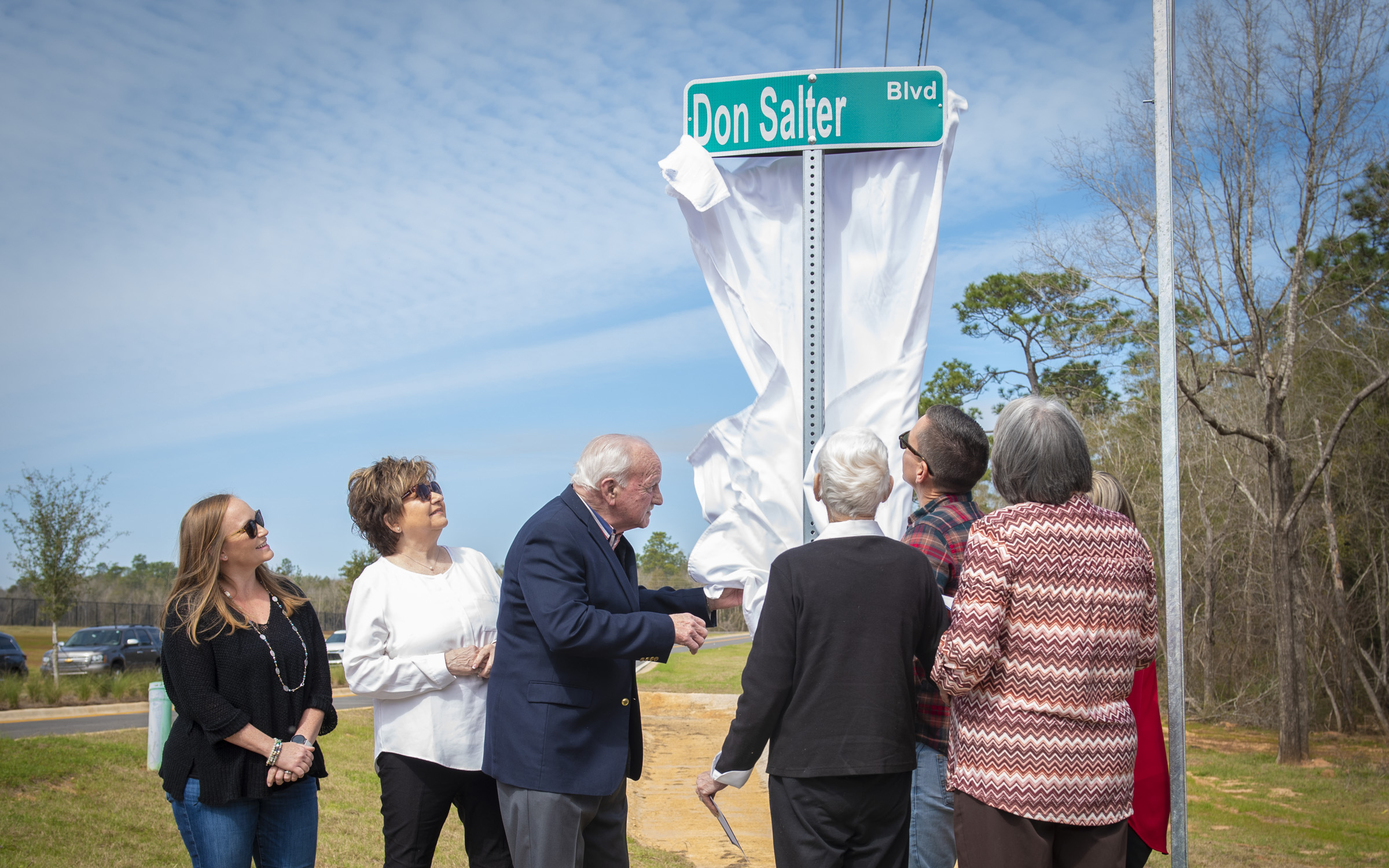 Keynote speaker John Griffing recounted Salter’s history as an innovative thinker and someone who has worked hard to make Santa Rosa County a better place to live and work.

A native of Santa Rosa County, Don Salter attended Troy State University and graduated with a Master of Science degree in management. After graduating, Salter proudly served his country as a United States Army Paratrooper from 1965 to 1968. His last fifteen months in Vietnam were served with the 173rd Airborne Brigade as a combat platoon Sergeant where he was awarded the Bronze Star Medal.

Upon leaving the Army, Salter started his career with the Gulf Power Company where he quickly moved up to serve as the Santa Rosa County District Manager. He retired from Gulf Power in 2000 after 32 years of service. 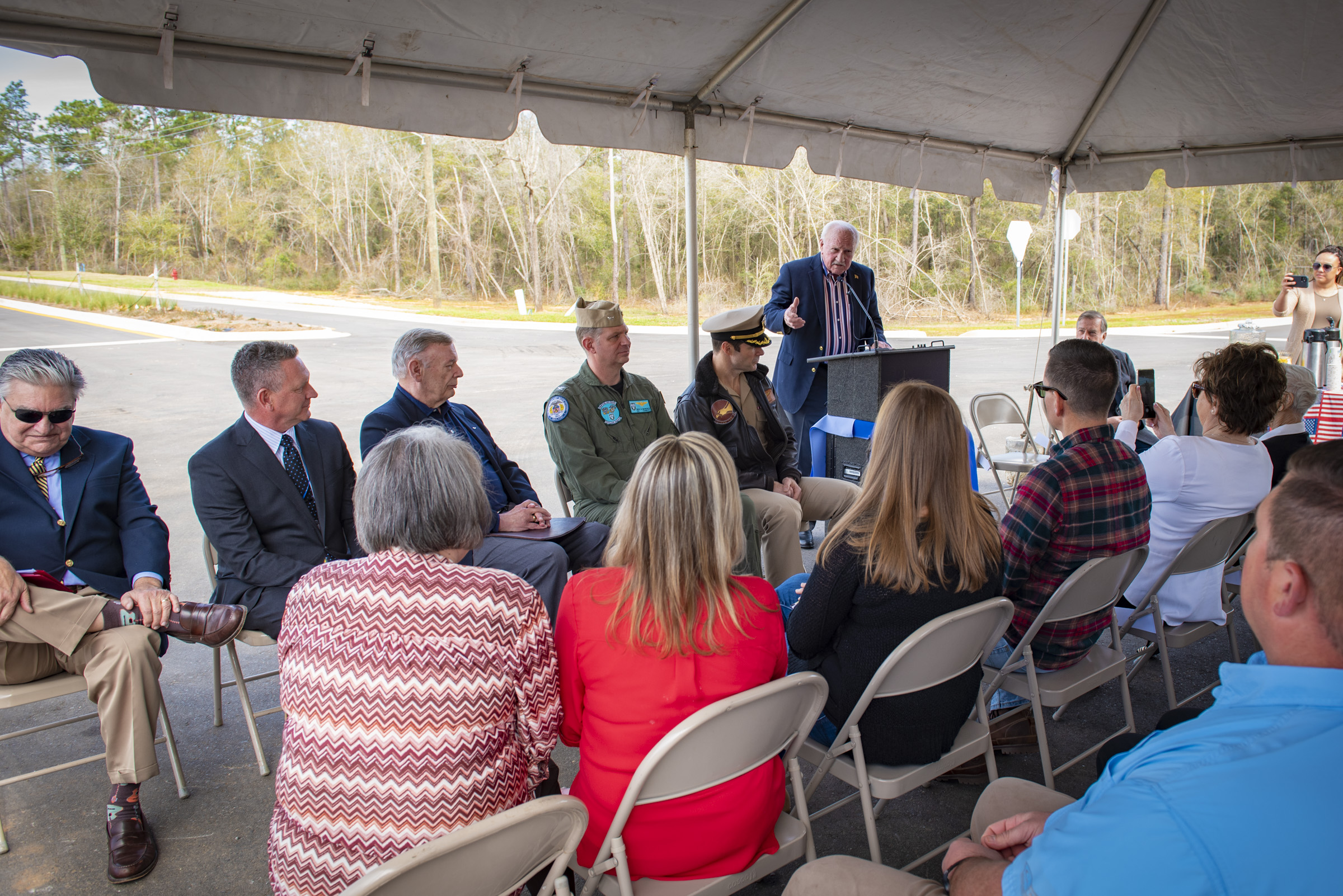 As a county commissioner, Salter was instrumental in economic development, agriculture, military and veteran affairs. He worked for many years protecting and enhancing military installations, especially NAS Whiting Field.

“I’m honored to be here today to help dedicate this road and I’m also honored to have it in my name,” said former District 3 County Commissioner Don Salter. “It’s the end of 30 years of hard work but it’s also the beginning of the future. This road will be well-traveled. It will be the future of Santa Rosa County and the region as it will create many aviation jobs and make Whiting Field more efficient.”
Captain Paul Bowdich, Whiting Field Commanding Officer from 2018-2021 praised Salter for his ground-breaking vision and leadership to develop a program for purchasing several thousand acres of land to prevent development encroachment around our military bases and then partner with the base to bring industry that services the military (like Leonardo Helicopter). The NAS Whiting Field encroachment prevention program is considered “The Navy Model.”

Salter served as chairman of the Santa Rosa County and Escambia County Base Realignment and Closure "BRAC" Committee for several years and served on numerous military committees throughout the region.

“Our community partnering relationship with NAS Whiting Field is unrivaled across the nation and the Department of Defense,” said Robert A. “Bob” Cole, Chairman and District 2 Commissioner. “Leadership is the cornerstone and fundamental pillar of what we’ve achieved over the last 75 years and more. I’ve had the pleasure to serve with Don Salter for 18 years. Through his leadership, we accomplished many things in this great county we serve.”

During the last 20 years, Salter has been fully involved in many community organizations. He is the founder of the Santa Rosa Veterans Memorial Plaza. He also served as Chairman of the Emerald Coast Honor Flight, the Santa Rosa Initiative Committee and the Santa Rosa Military Advisory Council.